On and off Winter 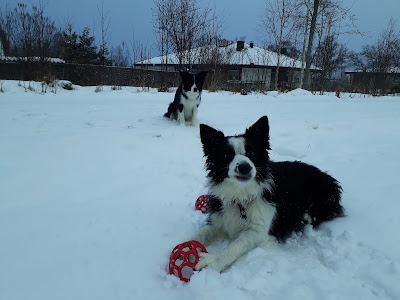 In the beginning of the year we had a couple of times perfect amount of soft snow that we could do some obedience exercises. The picture taken after "working" with the rewards. Of course, it is Jinga who is entitled for the rewards (Prikka never things she is entitled if the other two are around). 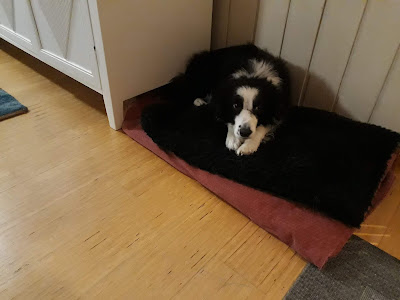 Jinga's bed exploded after being in heavy constant use for nine years. I did not find any ready made from the stores, so I had to make one all by my self. She is happy with the new bed even though she does not show it in this pic. 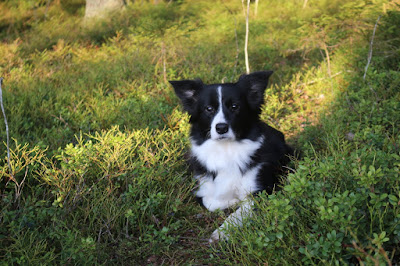 In mid January it started to look like this in the sunny spots. 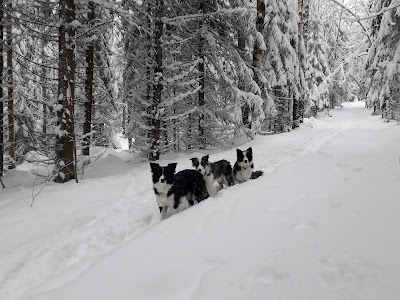 There were days when we got lots of snow for our paths like n the end of January. 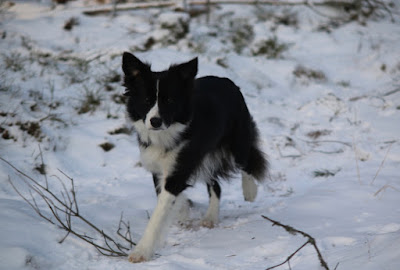 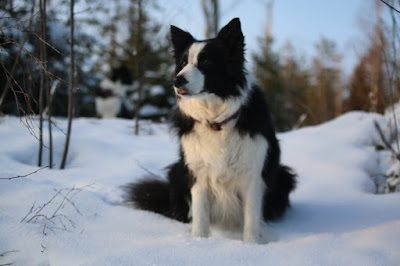 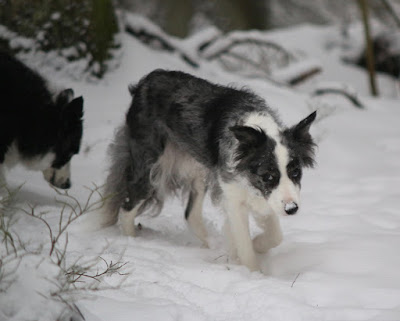 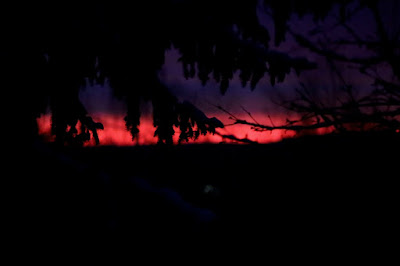 In January the sky was sometimes purple, sometimes red or pink when leaving for work. 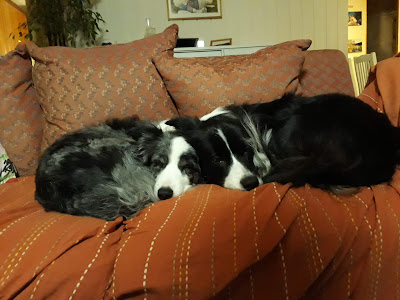 This is a rare sight in our house - no idea why it was so cosy side by side. 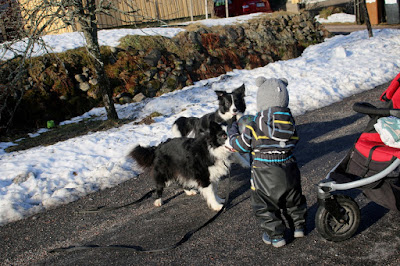 Mid February and most of the snow gone - again. The dogs had a personal trainer for the weekend. 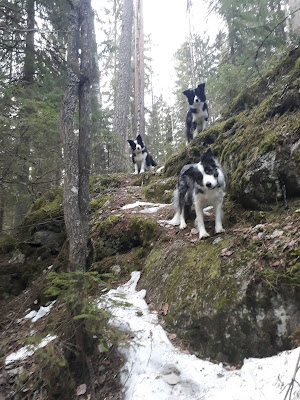 The forest with hardly any snow, lots of walking on icy paths. 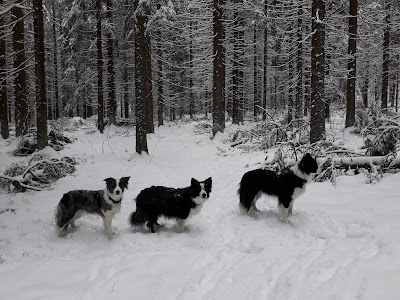 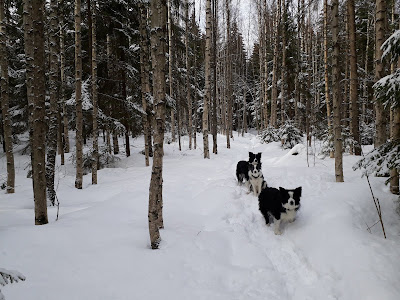 The paths are quite narrow for the trio. 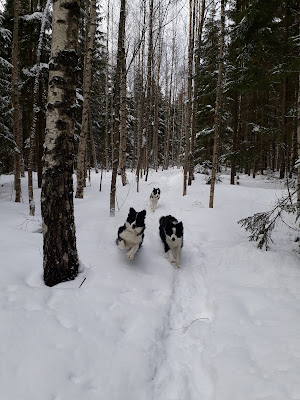 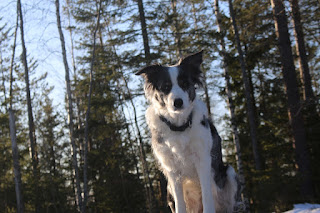 Kiila on sunny Sunday in March 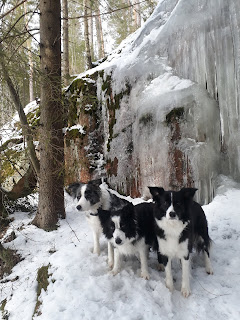 Sunny day in the beginning of March and
posing in front of the ice wall by the lake close by. 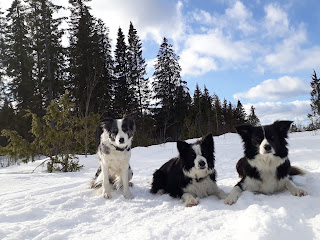 Last weekend we enjoyed walking on the hard snow deck. The whole new world is open after warms days with the night frost. We had a long and sunny walk when walking on the open space. Usually we just see tiny spots of sun, in the shade of trees. 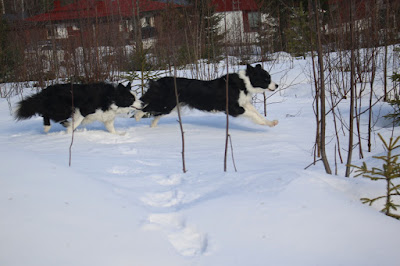 Last weekend the next day, we did obstacle search on the snow deck. The dogs enjoyed. The pictures taken after the "work".  Of course the dogs worked individually and Prikka and Jinga hhad two turns to find four obstacles, Kiila did it once. 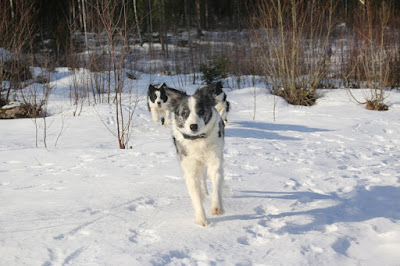 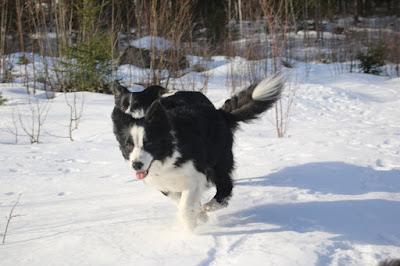 Running after the rewards. 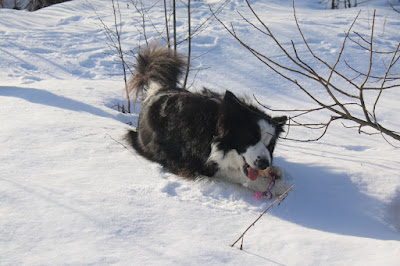 Jinga collected again most of the toys for herself.
March 20th, vernal equinox, very sunny day 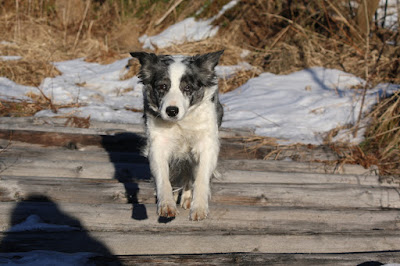 Besides not hearing anything, it looks like Kiila is losing her sight, too. At least she has difficulties to estimate the depths of things. Always when we need to jump over the streams and ditches, she realy hesitates and tries to find an easier spot for herself. Same with the tiny "bridges" like in here. 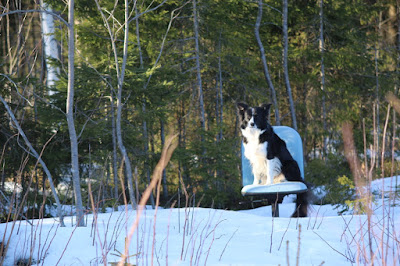 We found a chair (in a perfect condition) in the middle of forest. Someone has carried it a long way from the roads. We are living our first Corona week, meaning that we have been working from home the whole week. We are lucky, since it has been so easy to organise to work from home and we do not have to take care of the kids and their homework and their need to socialise.  Prikka is here pretending to work away from home, having the home office in the forest. 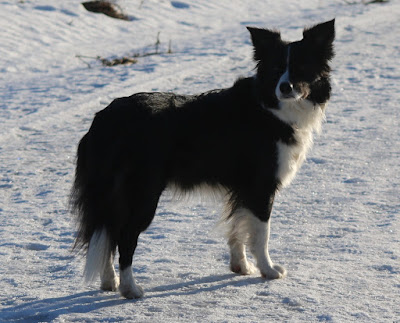 On the snowy road, this is usually a ski track but now, so worn out in many spots. 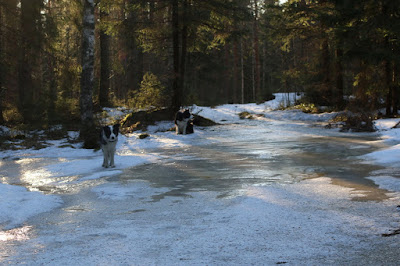 Our path  was mostly dry, but it included also some puddles,
we needed to jump over or some very icy spots, too. 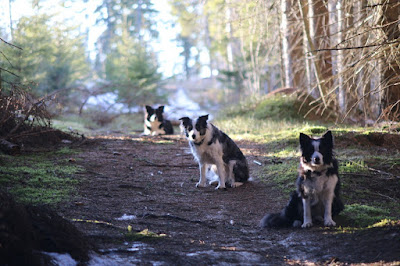 Evening sun shining warmly on the doggies in some spots. 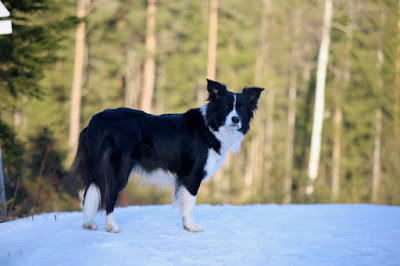 Prikka and the evening sun behind her. 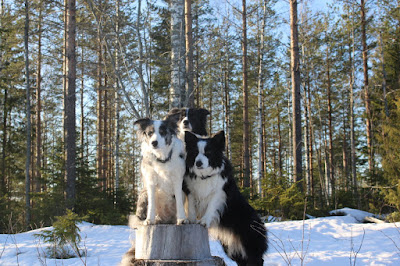 Let's see how much room will each one of us have for herself in the weeks ahead,
how isolated we will be. It can be a long spring and summer with just a few contacts.