My two year old birthday girl having a busy weekend

Finally, the weekend for action, the weekend when Prikka turned two! I had registered my doggies for two shows held in Norwich. Both of the girls did pre beginners both days plus Prikka did beginners and Jinga novice. Prikka had a nice theme for her birthday party: competing two days, in between a nice walk on the beach and camping. 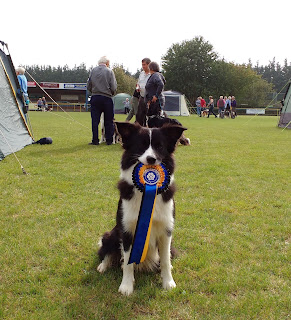 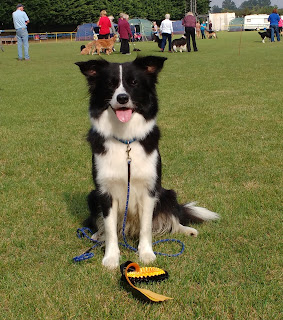 Jinga was the second dog to do the pre beginners, we did not have too much time to look at the others, especially because I looked at the wrong ring! That cost Jinga loosing the points in recall, stupid me thought that "finish" after calling her means finish, though I should have known better. I should have understood to ask her for heel position. Prikka did profit from my errors with Jinga, and we did quite a nice round with her. Judge was very happy with our movements but told that we lost important points because I was far too fast in the turn about. The dog did not have any chance to keep close contact with my turns. Stupid handler again! Prikka came out of the ring losing 2,5 points. That was enough for the second place in that ring.
Stays for this class were pretty soon after, 10:30. Jinga my obedience champion did not feel comfortable with all those 40 dogs and owners and judges, she went down by the end of her sit stay. Prikka was good. I had barely time to take dogs out of the ring before it was the Prikka's stay for beginners, 11:05. She had a nice sit and down stays, even though the neighbouring Münsterländer approached her and tried to kiss. Then ready for the Jinga's stay for novice. Alas, I read and remembered from my notes that her stay was 11:30. First the sit stay, I wondered that already in novice that we walk out of sight, but that is what we did. Returned back in two minutes, and now Jinga luckily sat nicely in one position. Then ready for down stay. We left the ring again, and now the other competitors were talking about ten minutes. Then I had to ask in what class we are, with this ten minutes. So disq in novice for Jinga but she did beautiful stays in class C. Now, I know that she can stay ten minutes. I should have been 11:50 for stays, forgot the rule always double check that you are in the correct stay.
After the lunch I had Prikka in beginners. I thought I was not anymore hasty with my turns but the video tells something else. And for some odd reason I made a left about turn (what we "never" do, we lost points for this stupid mistake as well. In the recall Prikka did the old mistake, she did not give her dumbbell with the first command plus hurried to heel position before she was asked to. Otherwise good performance! We were second with two other dogs losing 4,25 points. So we had to do run off, which was heel work lead off. That made our placing third. Perfect day for Prikka, unlucky for Jinga, disq and less good points because of the broken sit stay. 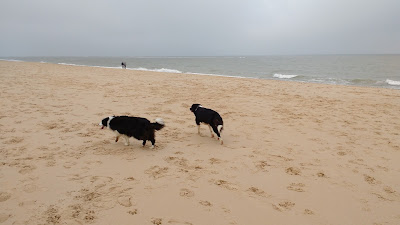 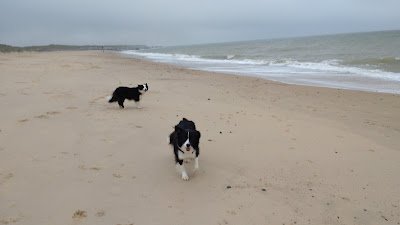 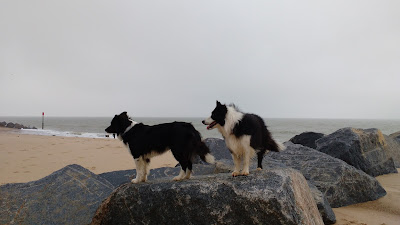 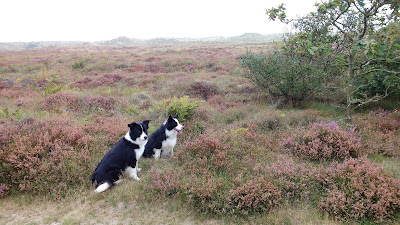 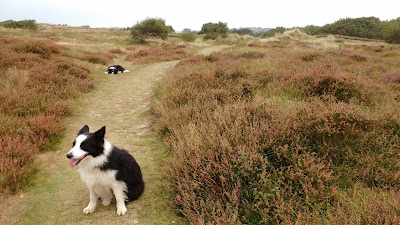 The birthday was crowned with a lovely walk on the beach and dunes of Winterton on Sea. The birthday program included also camping, which we did 15 minutes from the show venue. 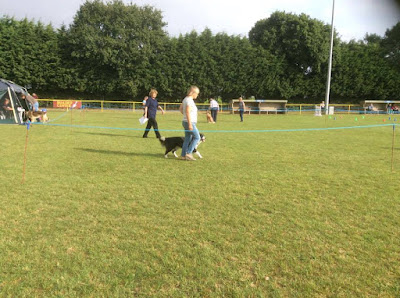 Picture by Gillian Wise, thank you!

The next day started with Prikka being the first dog in the beginners. I think we did better than day before, except the retrieve was the exact repetition of the one on Saturday. Anyway we lost 6,5 from that ring. Which gave us later the forth place.
After a while I took Jinga for the novice. Again an awful handler, for some reason I had not walked straight lines! Jinga also made her special twists when coming to heel position. So our points were nothing special, losing 7, 75.  What is the funny thing that when we practised to heel position outside the ring, she did it always perfectly.
Now, it was time to look at the pre beginners, first I took Jinga. We had a pretty good round. The only wierd thing was her extraordinary heel position movements in the recall. Five points lost with her. After a while I took Prikka, I thought we were pretty good but anyway lost 6 points. Later on both girls were asked for run off; Jinga for the second place, Prikka for the forth. Jinga won her partner in heel work on lead and got the blue rosette. Prikka's partner excelled in the recall. So Prikka received the forth rosette on her birthday weekend adding the colour brown in her collection.