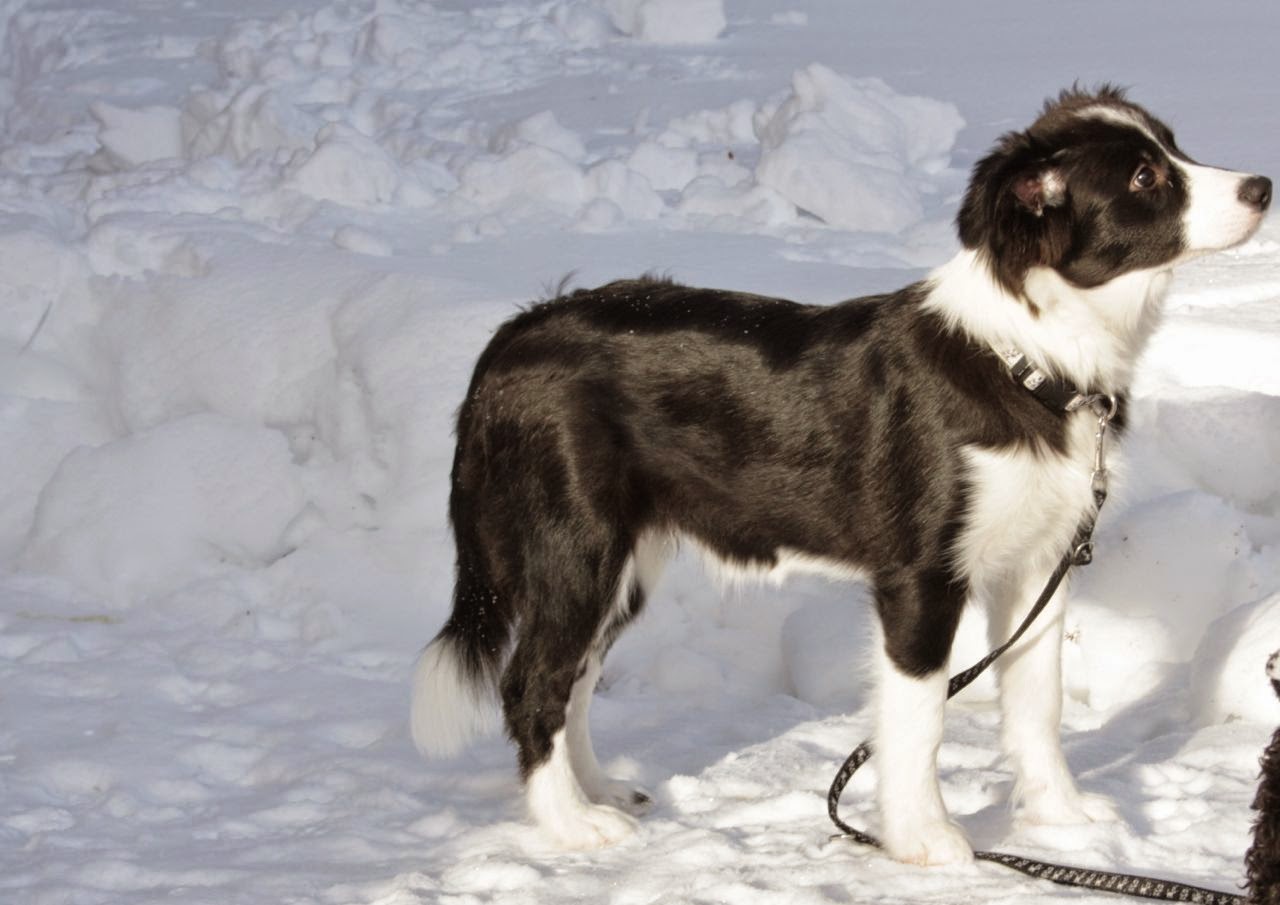 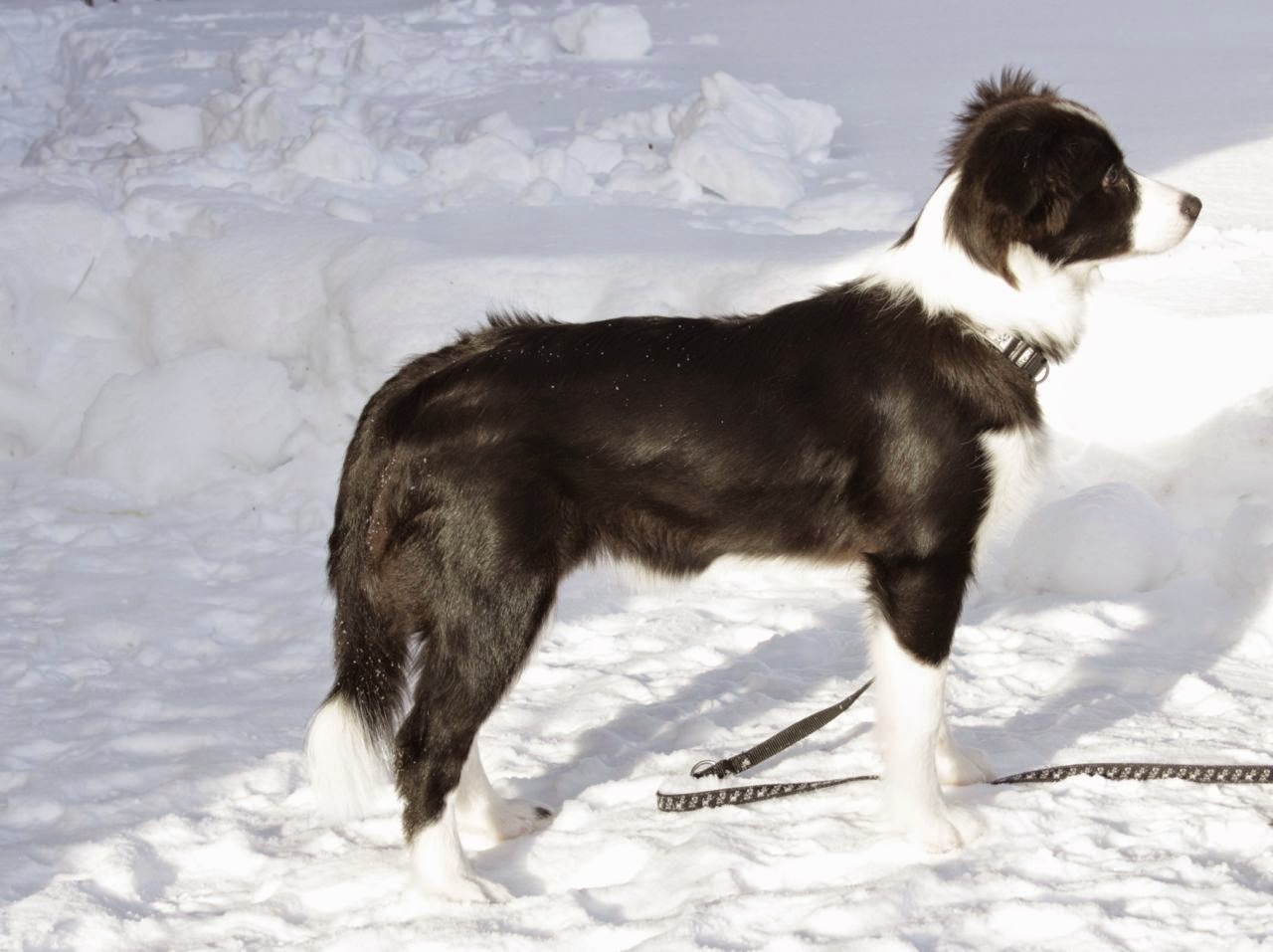 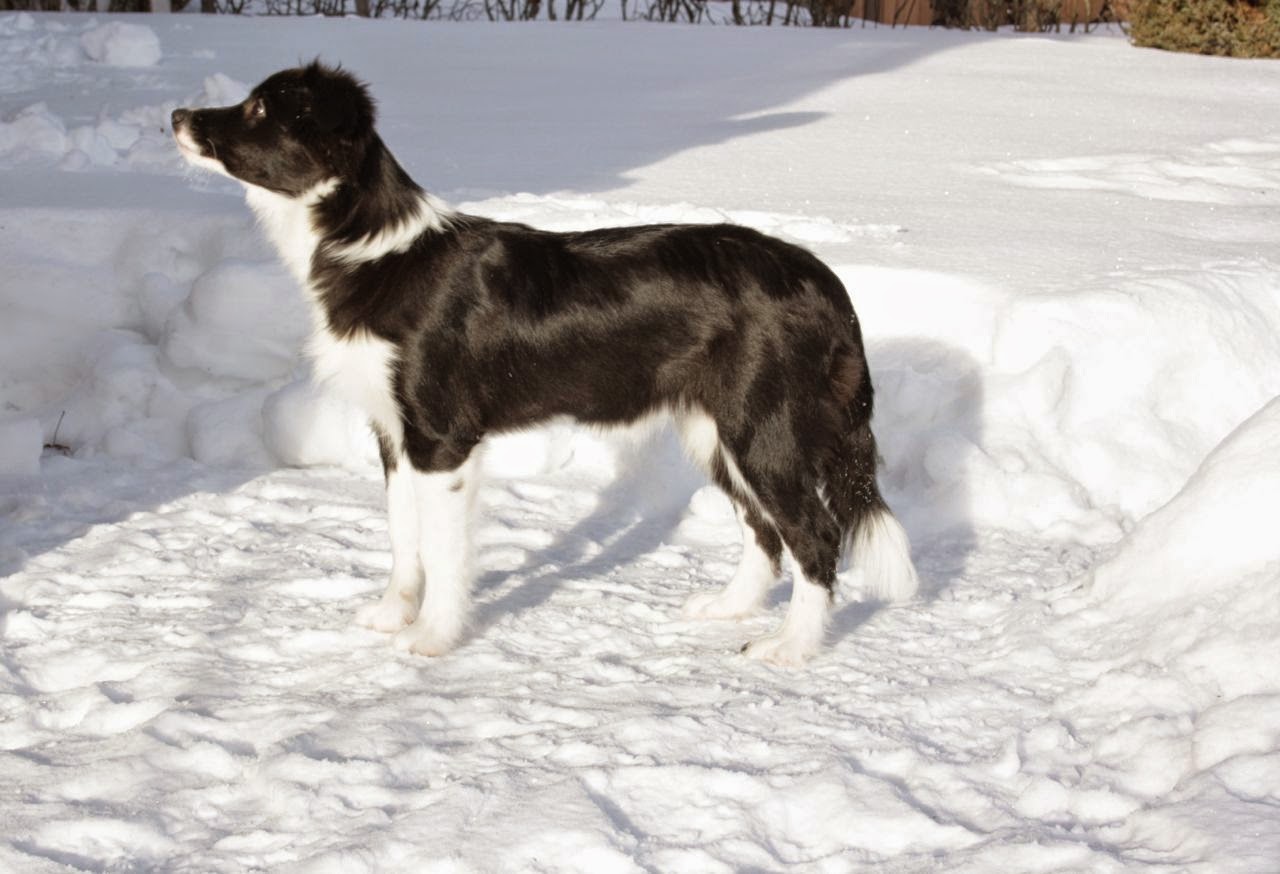 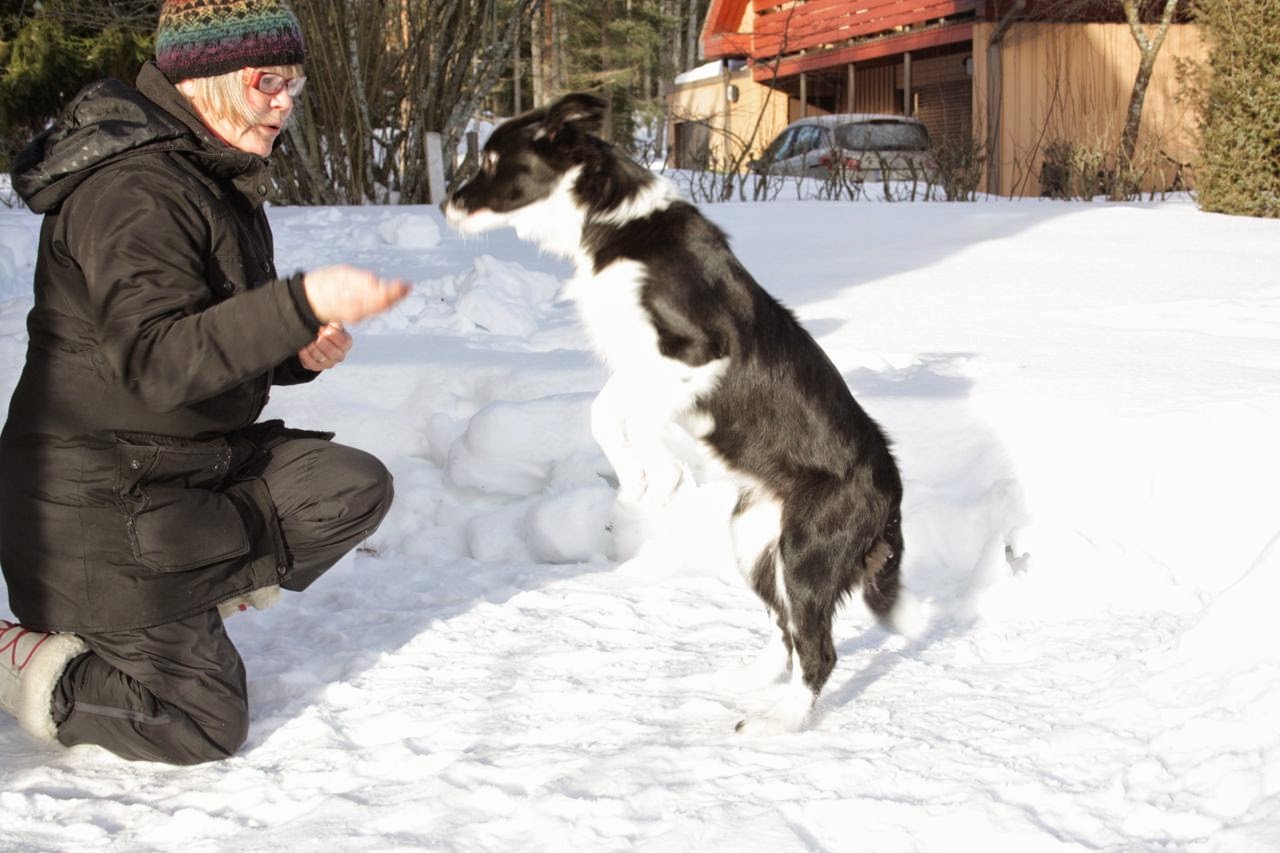 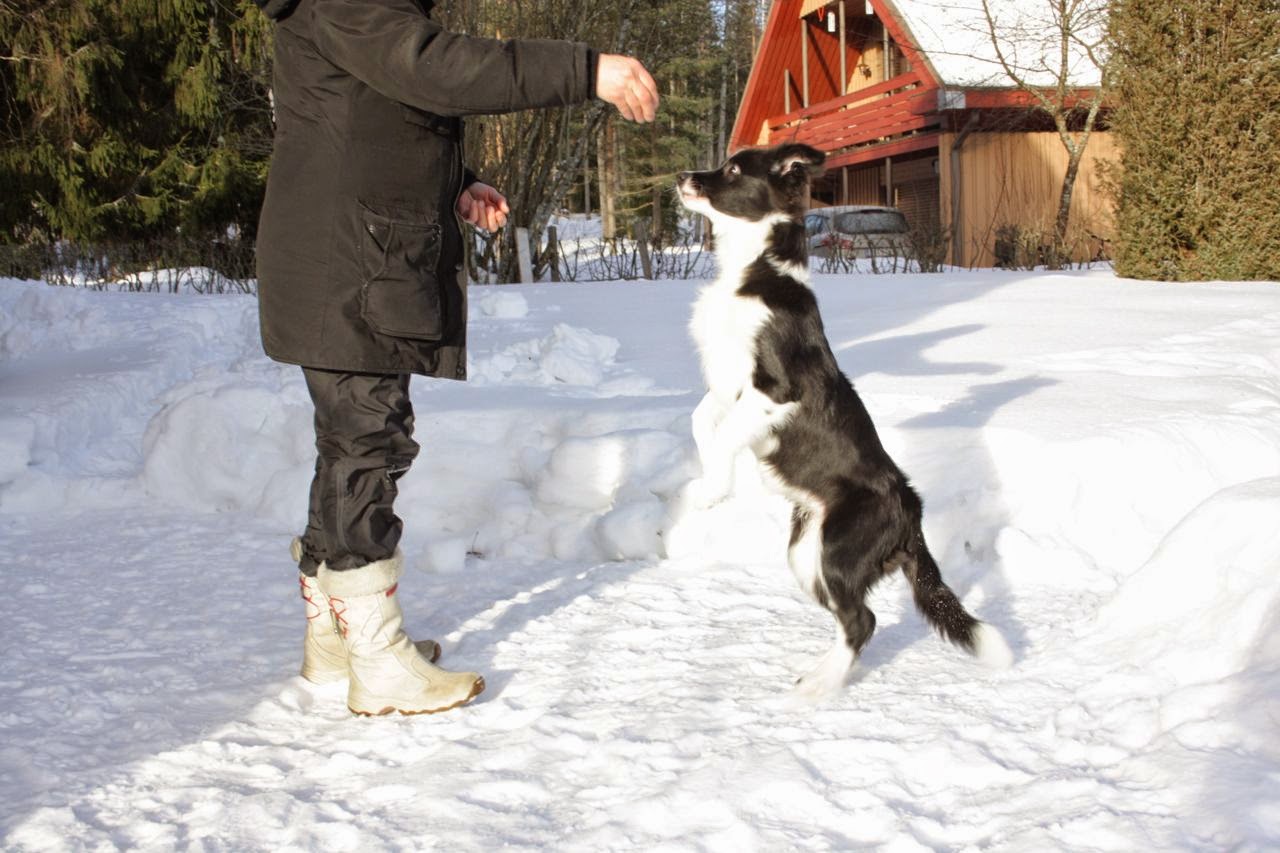 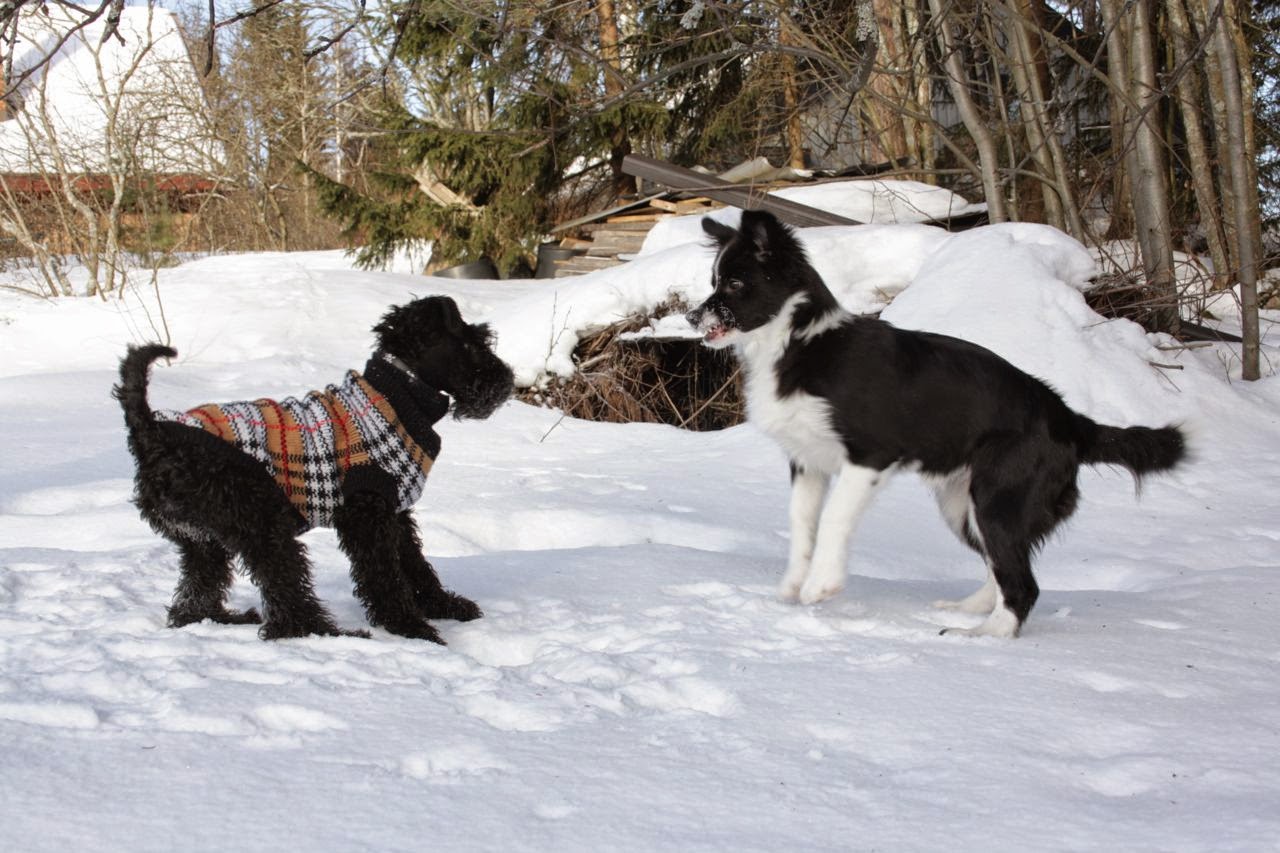 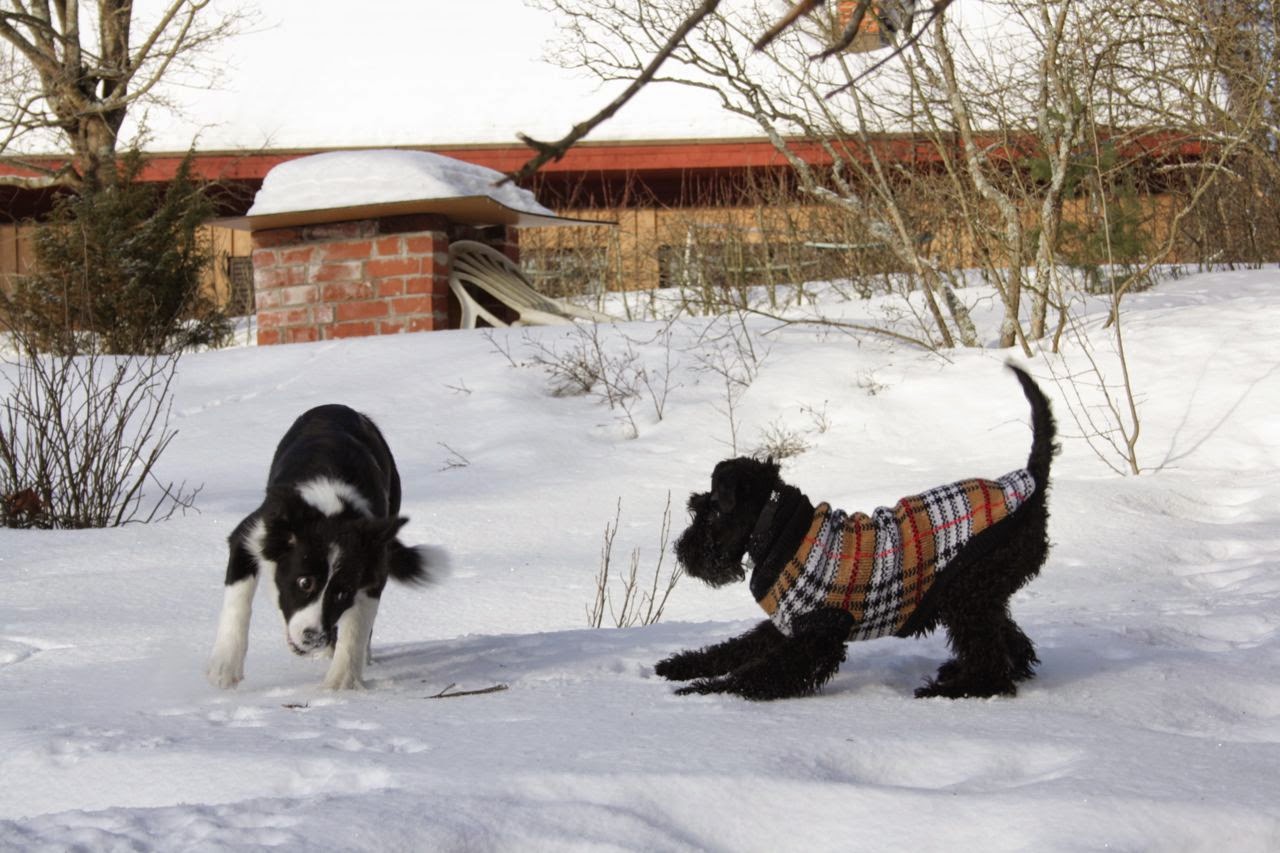 Prikka is getting "adult" both mentally and physically. She weighs as much as Jinga and I guess is the same  size, Jinga has just one more inch of hair, looking bigger. Training is so much more fun and complex when she learned the stay. Now we can do such a big variety of things since she has her stay.
She is even so "adult" that she was taken to the obedient class. This far we have been working mostly indoors. Now, we can also train outdoors when the weather permits (having more and more day light). Then I have taken her four times shortly to our training hall; Jattila, which is cold. This weekend was different, she came along to the obedience training to a warm dog hall Haukkuvaara. I had planned to take her there in March when she would be half a year old. Since the obedience course of my favourite coach, Oili, was not crowded, I decided to give Prikka a try.

And what a nice well behaving doggy she was. I have not crate-trained her, but she was so nicely in her crate when I was looking the other dogs being trained. After one and half hours I released her and Jinga and we went for a long nice forest walk for an hour. Then I had better conscience to crate her again for Jinga's turn. After a while it was Prikka's turn. And what a brilliant balanced little girl she was. She happily run to her target, showed her contact in heel position and her sit, down and stand. Then we played with two tugging toys sand did some basics for retrieving. We finished doing a couple of recalls, Oili was very pleased with my sensible nice working puppy. Not once did she look at the audience on our side, she was just 100 % focused on me. How proud I was! And from now on only fun in the training hall, either playing, different sen aways or recall, nothing boring or too detailed!
(Pictures in my previous posting.)

I have had many dogs and now for the first time I have a dog that is looking to the sky noticing the birds, even the moon. Pretty often she is very tentative when hearing or only seeing the birds flying somewhere closely. One day we were walking home, she was on lead and it was not dark yet, only getting dark and there was a half moon in the sky. She looked high up on her side and you should have seen her expression "what is that thing", she walked ahead but had to glance and she was just wondering, what …

We are soon ready for working trials - she knows tracking and is able to do the agility part. Often when I or someone else comes home, and she is taken out for pee. What does the puppy, she must track the foot steps, where did this one come from. Like I told a month ago, she is good with finding and picking up the lost obstacles, so that is also taken care of. Agility - she loves to jump. The snowy paths are quite narrow. Quite often there is a border collie (or two) sitting, standing or lying in front of her. She just loves to fly over them. She is very good at it. Today was the record, she jumped over two standing border collies-

Issue snow
I do not know how she is going to survive when snow is gone. She hardly drinks, when I let her out, she needs to eat snow, now hurry for pee, just eating the soft snow.
On the other hand she is going to be relieved when the snow is gone, now she is having difficulties when trying to keep the roads and paths clean. When she jumps to snow piles on the road side, she just dives deep down and it is impossible to try to poo, when the bottom touches the "ground". Poor girl!

Nowadays, she looks like a herring. She is not at all fluffy, instead the puppy coat, she has very smooth and shiny coat. In my eyes she is slender with her tall feet. Somehow I am thinking of herring because of her beautiful coat. But, I was told yesterday that she is fat (a bit more than 14 kilos). I guess she is not growing so fast as earlier that is why this happened.
Lähettänyt Riitta-Liisa klo 8.21